It wasn't supposed to rain, according to my BBC Weather app., but for the second consecutive Mileaters walk we arrived at our lunch venue somewhat bedraggled and wet-through; not for some years have we been rained-on, 2 walks on the trot. A pity, as for most of our merry band of 18 (+ 3 dogs), this was a new circuit; after a close encounter with the perimeter fence surrounding Winfrith (according to the map it's known as a "Technology Centre") a pleasant 2 miles on the Jubilee Trail ensued, enjoying some rare sunshine after downpour number 1, bringing us to the entrance of Tadnoll Nature Reserve. Across the heathland we manage to locate the rickety bridge connecting Tadnoll and Winfrith Heath NRs, but ominously all bird song had stopped - they must have sensed what was to befall us, and as we crossed the most exposed part of the heath so down it came. Sheltering in the birch wood, and not really finding much protection, we soldiered on only to be rewarded with the heaviest rain of the day. Oh well, we drank the fixture back in "The Countryman" afterwards.

Personally, I blame Chris - rain was a rarity until his walk ! Over the 30 days prior to the Piddlehinton walk only slight smatterings of drizzle appeared round these parts for an hour or two on just 4 days. Then on one day between 10:00 and 15:00 there was a proper downpour accompanied by robust gusts of wind. That day and that timeslot was exactly when 18 plucky and un-cowered Mileaters headed off on a trek which began with tracing the Piddle beside the floodplains from Piddlehinton to Piddletrenthide.

Turning up the hill into the headwinds we passed Duntnole Coppice and Kingrove Bottom, soon after which we encountered some distracted cows and calves trying to pluck flying seaweed out of the sky (OK so that bit might be a slight exaggeration).

Along the edge of an oilseed rape field still giving us some colour we strode, and then we cut into Incombe Wood where the bluebells were being flashy with their bright hues still on display. A wet coffee break in the woods preceded our march on to meet the four Mileaters who were on a shorter version of the walk. We arrived at the allotted meeting point to find them – absent. Demonstrating an utterly genius level of lateral thinking, this team had decided to conduct their walk not in the elements with the rest of us but instead around the dry and serene walls and vaults of Cerne Abbas’s church!  They did, however manage to hook up with us at the Thimble Inn for a great lunch in what soon became the pub’s steam room.

Congratulations to Malcolm and Keith who were the first to spot the retired and almost hidden double decker bus, winning the coveted Mars Bars. They are in the post, chaps…

Despite the very English weather, there was a lot of laughing and joshing as ever and truly welcomed hot showers and baths awaited the stoic Mileaters as the sun of course came out once we all got home. A successful walk even if a trifle disappointing. Successful in that 22 mileaters attended and the sun shone, and it wasn’t too taxing and everyone chatted and good humour abounded. Disappointing to some that we didn’t get in any way lost. Not one teeny weeny step was misplaced, sorry. And the picnic stop at Margaret’s seat was voted the best ever. I exaggerate a little, but it was lovely.

We started in Sutton Poyntz, from the Springhead Pub, walked along Puddledock lane reaching the base of Chalbury Hill Fort, skirting it, similarly with Green Hill teasing a steady but gradual incline up to the Ridgeway and it's fine views over Weymouth Harbour.  Walking above the renowned horse was very pleasant and it was a calm day. We descended into Osmington village via the rough chalk path and took the second of the two ways over fields back to Sutton Poyntz. The two stallions seemed quite relaxed about twenty-two of us sharing their field, even allowing a gentle nuzzle with some.

The pub was as efficient as ever and the beer excellent.

In fact, the walk was so satisfying that Roelie and Phil and Ollie decided to do it again backwards. NO not actually walking backwards, I meant in reverse. Which was equally satisfying but looked very different. As it would. The front of a horse is different to the rear.

Thanks to all who came and made it a great walk. Once again the weather gods were kind and on a beautiful sunny morning a select group of 19, together with 3 dogs assembled at the Royal Oak Car Park in Bere Regis for what was to be a most memorable ‘Bluebell Walk’. The route took us out of Bere Regis to the picturesque village of Shitterton, up through ‘May’s Wood’ and onto the Black Hill Clump. We travelled along the ridge, taking in the views over Bere Regis and Briantspuddle. We then followed the track down through Turnerspuddle and on to pick up the River Piddle and follow it south. After a coffee stop, with additional entertainment provided by Stuart on a tree swing near Throop, we returned to Turnerspuddle.  Enroute we passed a veritable ‘carpet’ of Summer Snowflakes, a rare plant found in very limited locations. Further on we entered the wooded area to be greeted by hosts of Bluebells, Wood Anemones and beautiful Violets. The trail took us back over the Black Hill Clump and back down into Bere Regis, passing the watercress beds. Throughout the walk we were treated to the serenades from Blackcaps and Chiffchaffs, identified by our own ‘Percy Edwards’ in Malcom!

On our return a wonderful lunch was enjoyed by one and all in the Royal Oak. In early April, 19 walkers and 3 dogs set off to Powerstock for a 4.5ml circular walk from The Three Horseshoes Pub. After a prompt start, 80% of the group arrived at the pub in a respectable time.  However, these 15 were kept waiting by the 20% who took a wrong direction towards Bridport and Wynford Eagle.

The delayed start didn’t make that much difference as a cracking pace was achieved over the first part of the walk until coffee time. On a sunny bank basking, in glorious sunshine, biscuits and fruit were eaten. The only thing missing was Malcolm’s pasty replaced by a healthy snack bar, my how things have changed.

Many of the group commented on the beautiful countryside that we were passing through. This, I think, would be even better in a couple of weeks time with more Bluebells and Wild Garlic in flower.

The second part of the walk had the group walking up a pathway being used by a spring as a means of joining the river. Our next stop was at a residence with donkeys in the field. Strangely enough the way markers have mysteriously disappeared but using detective work the true path was found around the property.

From there it was all downhill, literally! Back at the pub we were joined by a breakaway group of three who decided Eggardon Hill was more than enough for them to earn a nice lunch at the pub. Beer good, food, when it came, was also good.

I have to say that one of the previous late comers, despite ordering last, was served their food just as they sat down to the table. There is no justice in the world! Having scoured West Dorset to find a car park that would accommodate the large number of cars needed for recent Mileaters’ walks, in the event our numbers were reduced to eleven humans and four dogs,  by a combination of the plague, family commitments, retirement  ( for the second time), and foreign adventures.

In glorious sunshine and a welcome gentle breeze we set off from the Black Dog pub in Broadmayne.  Our six mile walk took us over wide gently undulating fields brimming with early rape, big skies. Not dramatic but peaceful, calming.  Having crossed  the gallops at Whitcombe and glimpsed Came House, a fine mid eighteenth manor house, we took refreshments in a chalk quarry before moving on to Whitcombe, a charming hamlet with a church that has fragments of medieval wall paintings, including unusually one of a mermaid combing her hair. Then back to Broadmayne via West Knighton and a welcome lunch outside where we were joined by Gerald, a beer already in his hand. 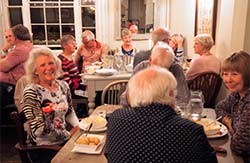 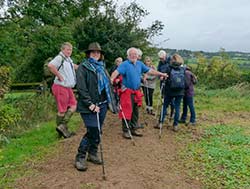 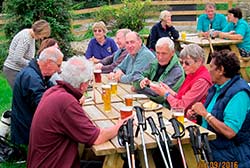 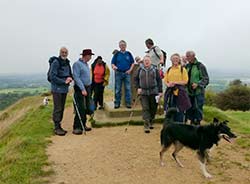 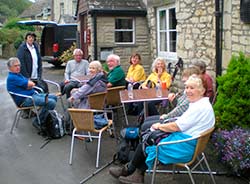 The village walking group began some 25 years ago with the aim of walking the Dorset Coast Path, in sections, from the Devon border to Sandbanks. Subsequently the reverse route from Sandbanks to Devon has been undertaken.

We are a friendly group of local residents, ex-residents, and colleagues from the area, who meet on a fortnightly basis to enjoy the diversity of the wonderful Dorset countryside. We take it in turns to lead a walk with most members being allotted a fortnight's slot twice a year. The choice of distance, location, and day within that fortnight is at the discretion of the fortnightly leader, but walks (anywhere in Dorset) are usually between 4 and 8 miles.

Walk details are distributed by email. A picnic lunch is often carried in the Summer, but a pub lunch in the Winter is the norm - rehydration is de rigueur! Generally we meet on the Village Green at 10.00 a.m.